The Heart Sutra and the Nature of Mind 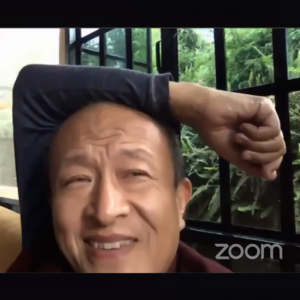 Note 1: This transcript is not an official publication of Siddhartha's Intent. Every effort has been made to ensure that this transcript is accurate both in terms of words and meaning, however all errors and misunderstandings are the responsibility of the editors of madhyamaka.com. Please see note.

Note 2: This transcript includes footnotes with clarifications and more information about Tibetan and Sanskrit Buddhist terms used in the teaching. Please click on the superscript number to read the footnote. Dzongsar Jamyang Khyentse Rinpoche's name is abbreviated to "DJKR" throughout.

The Heart Sutra and the Nature of Mind

Our mind is powerful and ever-present, but we don't take advantage of it

You know, there's nothing better to recite than the Heart Sutra2Ed.: The text of the Heart Sutra is available on the Practice page - see Heart Sutra., from every point of view. I think we all know how much we should really contemplate and look into our mind and our heart. I think you must know this. All of you have heard lots of Buddhist teachings, so you know this very well.

The world really needs to look into this mind. And this mind is just incredibly powerful. It's so near and it's so close. It's there all the time. You cannot sort of “pause” it. You cannot take leave from the mind. It's there. But we're just not able to take advantage of this [mind]. We go astray. We go away from this mind. This mind that is like an ocean, that is so deep and vast and still. It’s actually very clear. Pristine. Clear. But we are not able to take advantage of that, and we get so distracted by the surface. On the surface [of the ocean] there are a lot of waves. And we have lots of waves [in our mind].

I think that you and I should consider ourselves quite lucky because at least we are talking about these things. At least we are talking about this subject. I mean, how many people are talking [about these things] today? Most people don't even know that this [mind] exists. I don't know whether people even know that there's something called mind, something so precious and so sublime. So pristine. So abundant. So rich. There's so much creativity and so much light.

We go astray and get entangled

The Buddha refers to himself as Tathagata

We are chanting the Heart Sutra mantra:

The word “gata” is actually quite rich5gata (Sanskrit: गत) = gone, departed, arrived at, being in, situated in - see gata.. It means both “coming" and “going", or arrived and gone. Sanskrit words are just so rich. It’s such a beautiful language. "Gate" means come and gone, both together.

And “tatha” means “what it is” or “this” or “such”. Or in the context of what we were talking about earlier, it [refers to] the mind. This pristine, clear, unexplainable and unnameable [mind]. But it's there. You have it. I have it. It’s very, very cognizant. Very alive.

We need to be mindful of this mind

As you know, mindfulness is such a big tool in Buddhism. And what are we mindful of? Basically, it boils down to being mindful of mind itself.

We are not [trying to be] mindful of this or that [DJKR indicates various objects around him in the room]. We are being mindful of this mind that I was talking about. The ocean-like mind. That unshakable, unfabricated, uncontrived [mind], that is just so deep, vast, rich, vibrant, colorful, creative, loving, compassionate, bodhichitta, whatever, … [it has] so many names.

First of all, we don't even know that there is mind. You know, [the mind that] I was talking about, that beautiful mind that we can arrive [at]. And some of us, like you and me probably, even though we know “Wow, that is quite beautiful. That is so rich and so wonderful”. But even though we [know] that, we are so accustomed and habituated and addicted to voyaging, traveling, not arriving, not coming, not going. We're so addicted.

We just dare not [be mindful of this mind]. It's understandable, because to reach [this mind], to come there and to stay there. it's also kind of scary. Because it's so simple. That simplicity. Wow.

So there are a lot of techniques [in Buddhism] to put a leash on ourselves so that we won't go too far [astray]. And I think today [for the past] twenty-four hours we have managed to put on a leash called the Heart Sutra, with chanting, with a sort of sing song.

And this is what mindfulness is all about. [You are] really trying to tie a leash on [yourself], so that even though you may go [astray], you [do] not go too far. So you will always come back, always come back.

Of course, every day is a special day. Every day is a holiday. Every day is the Buddha’s Day. Of course. But for human beings like you and me, it’s good to have a designated time such as today, the day of the Buddha’s birth, his parinirvana, his enlightenment, and so forth. And this is all designed to hopefully at least keep you closer to this mind that I was talking about.

And if you read the Heart Sutra, and you have read it many times now, you [will] know that it really explains [this] so well. “No increasing, no decreasing, no birth, no death”. Basically, this is talking about your mind. “No eyes, no ears, no nose”. All of that. It’s really fundamental.

Obviously you know that the Heart Sutra is not like a nihilistic negation of everything. It's definitely not. It is very much a description of the mind that you have and I have. [This mind] is difficult to describe, but the Heart Sutra has probably has done the best job.

Thank you for taking part in this online practice

At least for me, this has been the first time that the Heart Sutra has been chanted straight through the very special day of Saga Dawa in a twenty-four marathon, which is fantastic.

Thank you for joining us. I sure some people really want to practice, and some people also just want to sing songs, which is fine. Many people are already talking about wanting to do more of this, so I'm sure we will think about a lot of things [we could do]. If you have any ideas about what we could do using Zoom, this kind of medium, please write to us, to me.

And yes, please wash your hands. And, I guess, social distance. And moisturizers.

Let's take this difficult occasion and turn it into something meaningful

And also I think we should pray and aspire that collectively our leaders, and us of course, [that] we will all really take this opportunity to look at the world in a different way. Not just always talk about the economy, because I think we have a good chance now to jumpstart and restart [in a different way]. Like computers have “boost” or something? I think maybe [there is a different way] environmentally. Because I think this situation that we have had [for the] past few months now, and now especially in America, all this has really made us realize that we are just so fragile. We are like a dewdrop.

So that's also kind of important. Yes, of course, for emotional human beings like us, it's very painful and unpleasant. But I think it's important to take advantage [of this]. Take this occasion and turn it into something meaningful, at least individually for ourselves. Well, that's it.