Praise of the Buddha 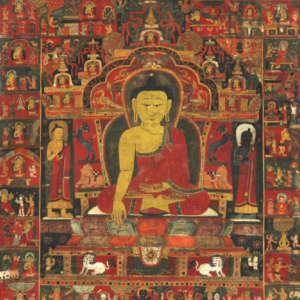 Praise of the Twelve Acts of the Buddha

[Go to text of Praise of the Buddha]

In a series of poetic verses Jigme Lingpa pays homage to the Buddha Shakyamuni by recalling his most significant deeds, from his initial descent from the heaven of Tushita to his final attainment of parinirvana. It is recommended to recite this prayer especially on Saga Dawa Düchen, the anniversary of the Buddha’s enlightenment and parinirvana.

The translation below is by Rigpa Translations. The twelve acts are indicated by footnotes. Please click on the numbered superscript for more information.

In the city of the immortal gods, in the heaven of Tushita, 11. The descent from Tushita, the Joyous pure land (dga’ ldan gyi gnas nas ‘pho ba).
The bodhisattva, holy Shvetaketu, saw the vessel
To contain the successor of the Shakya clan 22. Entering the mother’s womb (lhums su zhugs pa).
Was the lady Mayadevi, her eyes of doe-like beauty.
Like the splendour of a sunrise on a mountain’s eastern face, 33. Taking birth (sku bltams pa).
She gave birth, a lotus opening in blossom, in the Lumbini grove,
Brahma and Indra there to serve you, to tend you with all their grace;
You who were prophesied into the lineage of enlightened ones, I bow to you in homage! Among the Shakya youths, vaunting their athletic physique, 44. Becoming skilled in various arts (bzo yi gnas la mkhas pa).
You excelled in your prowess in the sixty four crafts;
All conceded victory and your renown
Filled the eyes and ears of all.
Never were you slave to the noose of craving and desire,
Yet to please your father, you married, but saw this illusion 55. Delighting in the company of royal consorts (btsun mo’i ‘khor dgyes rol ba).
For the illusion that it was, ruling the kingdom all the while.
So you were known as Sarvarthasiddha: I bow to you in homage! Though precarious, fraught with danger and with change,
No-one was immune to the allure of the kingdom, save you.
Your mind was captivated by the four encounters that caused renunciation, 66. Developing renunciation and becoming ordained (rab tu byung ba).
And you ordained yourself, a self-originating bhikshu.
Your constant perseverance, never tiring, by the Nairañjana river 77. Practicing austerities for six years (dka’ ba spyad pa).
Gave you the strength of mind to bear the agony of austerities, and
The concentration to keep on taming conceptual thought,
Which delighted the sugatas of the ten directions: I bow to you in homage! Through three incalculable aeons in samsaric existence,
You sought the meaningful, by binding all your thoughts
With the rope of accumulating merit and wisdom. 88. Proceeding to the foot of the bodhi tree (byang chub snying por gshegs pa).
Then, beneath the bodhi tree, you put the maras to flight, 99. Overcoming Mara’s hosts (bdud btul ba).
And attained enlightenment, as all the buddhas do. 1010. Becoming fully enlightened (mngon par rdzogs par sangs rgyas pa).
On the ship of the three turnings of the Wheel of Dharma, you save 1111. Turning the wheel of Dharma (chos kyi ‘khor lo bskor ba).
Beings who rush into samsara’s bottomless and endless abyss,
And ferry them to the perfect levels of liberation and omniscience:
I bow to you in homage! Through the magical power of your miracles in Shravasti,
You rendered speechless the tirthika teachers who,
With all their analysis and research, drunk on the wine of indulgence, had become oppressive in the extreme.
In the final contest they were humbled, their prestige all drained away,
As you triumphed through the ‘the four bases of miraculous powers’.
Though you never experienced the feelings of birth, old age, sickness and death,
To bring disillusion to those who never think on the certainty of death, 1212. Passing into mahaparinirvana (mya ngan las ‘das pa).
You displayed your passing into parinirvana: I bow to you in homage! As a device to let beings whose merit is weak or small
Increase their practice of the positive and virtuous,
You left relics, that were inexhaustible, in eight shares,
And you slept in the dharmadhatu. So, may I too
Bring perfecting, maturing and creating pure realms to completion,
Then in the great Akanishtha, that transcends the three realms,
Attain manifest buddhahood and through the ten acts displayed by a supreme emanation,
Become your equal, omniscient one, in benefitting beings!

This is the word of Rigdzin Jigme Lingpa.

[Go back to beginning of Praise of the Buddha]

Translation by Rigpa Translations. (The text above has been edited to remove most diacritics from the Sanskrit).

This work is licensed by Lotsawa House under a Creative Commons Attribution-Non Commercial 3.0 Unported License.