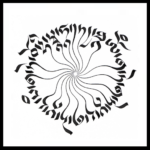 Described by Dzongsar Khyentse Rinpoche as "the head, heart, soul and spine of Mahayana Buddhism," the Heart Sutra is perhaps the most popular Buddhist text in East Asia. Rinpoche suggests it is auspicious to chant the Heart Sutra daily, especially while studying Madhyamaka.

This is perhaps the most famous praise of Mañjushri recited by Tibetan Buddhists. According to legend it was composed by 500 Indian panditas simultaneously, in response to a request from their abbot, after whom it takes its formal name Shri Jñana Gunaphala, "Glorious Wisdom's Excellent Qualities".

The Mañjushri-Nama-Samgiti is a tantra of the nondual (advaya) class, along with tantras such as the Kalachakra Tantra. Buddha taught the Nama-Samgiti to his disciple Vajrapani and his wrathful retinue in order to lead them to enlightenment. Although it is only a short text of 167 verses, it summarizes all the Buddha's teachings. As the Buddha said:

It is the chief clarification of words. It is the nondual reality. Therefore, all sentient beings should definitely study and recite the Mañjushri-Nama-Samgiti.

Although the Nama-Samgiti is a tantric text, Jamyang Khyentse Wangpo explains that it may also be recited by "beginners who do not practice the profound yoga ... who wish to recite the tantra as a praise to Mañjushri’s formidable qualities." When he was teaching the Madhyamakavatara in France in 1996, Dzongsar Khyentse Rinpoche read this text as an auspicious offering and praise, and said:

This is praised as being the root of all the tantras. It is like a Buddhist Bhagavad Gita. As I read, you should pray to be born as Mañjushri’s assistant, as his disciple, when he attains enlightenment. He is supposedly the last buddha that will be enlightened during this kalpa. It is also said that he was the first buddha of this kalpa.

Wisdom's Bestowal is a text by Jamyang Khyentse Wangpo subtitled "A way to accumulate the recitation of the tantra Chanting the Names of Mañjushri, Mañjushri-Nama-Samgiti." It is a 'means of recitation' that explains how to practice the root text, and it also provides additional prayers and practices to be recited before and after the root text. Jamyang Khyentse Wangpo suggests four different ways to practice the Mañjushri-Nama-Samgiti: