The Aspiration Prayer of Samantabhadra 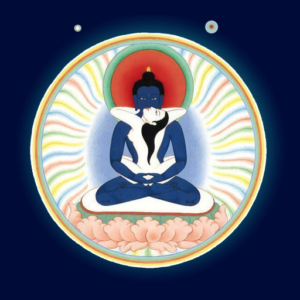 [Go to text of Aspiration Prayer of Samantabhadra]

This aspiration prayer (also known as The Prayer of Kuntuzangpo or Kuntuzangpo Mönlam) is among the most popular texts of the Dzogchen tradition. Its recitation is especially recommended during solar and lunar eclipses, at the solstices and new year, as well as during earthquakes and other environmental anomalies. It is the nineteenth chapter from The Tantra that Teaches the Great Perfection as Samantabhadra’s Unobstructed Awakened Mind  (Gongpa Zangthal Gyi Gyü), which teaches that by aspiring in the manner of this prayer, all sentient beings cannot help but awaken.

Note: Please see also the teaching on the Kuntuzangpo Mönlam given by Dzongsar Jamyang Khyentse Rinpoche on June 21, 2020 (Summer solstice).

The translation below is by Karl Brunnhölzl.

Dr. Brunnhölzl is a teacher, interpreter, and translator in the Tibetan Buddhist tradition. Originally trained as a medical doctor, he studied Tibetan language and Buddhist philosophy at the Marpa Institute for Translators in Kathmandu, founded by Khenpo Tsultrim Gyamtso Rinpoche. He also studied Tibetology, Sanskrit, and Buddhology at Hamburg University. Since 1989, he has been a translator and interpreter from Tibetan, English, and Sanskrit. He is presently involved with Nalandabodhi and the Nitartha Institute as a teacher and translator. Dr. Brunnhölzl received the 2019 Khyentse Foundation ‘Outstanding Translation Award’.