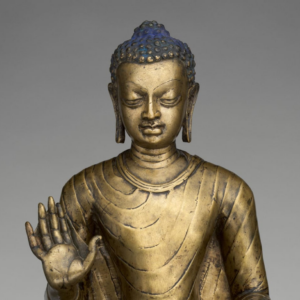 This page contains a selection of quotes from Buddhist and non-Buddhist sources that appear on this website. They are loosely organized according to the main topic of the quote.

By Jigme Lingpa (source unknown). DJKR often quotes this when talking about the limitations of thought and language in expressing nonduality:

From the Lankavatara Sutra1Lankavatara Sutra (लंकावतारसूत्र) = a prominent Mahayana Buddhist sutra compiled around 350-400 CE that recounts a dialogue primarily between the Buddha and a bodhisattva named Mahāmati, "Great Wisdom". The topics of the sutra include Buddhanature and the teaching that consciousness (ālāyavijñāna) is the only reality, and that all phenomena that are mistakenly taken to be external objects are merely manifestations of the mind. This sutra is very important for the Yogācāra school and Chan and Zen Buddhism - see wikipedia. , 223-224 (trans. D. T. Suzuki):

As the ignorant grasp the finger-tip and not the moon, so those who cling to the letter, know not my truth.

From the Shurangama Sutra2Shurangama Sutra (शूरङ्गमसूत्र) (Taisho 945) = a Mahayana Buddhist sutra that has been especially influential in Chan Buddhism. The sutra includes the popular dharani known in Chinese as the Léngyán Zhòu (楞嚴咒) or Shurangama Mantra. It is well-known and popularly chanted in East Asian Buddhism and also known in Tibetan Buddhism as White Umbrella. The current consensus among scholars is that the bulk of the Shurangama Sutra is based on Indic material from the Nalanda period (5th-6th centuries) that was later edited in China. The first catalog that records the sutra was published in China in 730 CE - see wikipedia.:

The Buddha told Ananda, “You still listen to the dharma with the conditioned mind, and so the dharma becomes conditioned as well, and you do not obtain the dharma-nature. It is like when someone points his finger at the moon to show it to someone else. Guided by the finger, that person should see the moon. If he looks at the finger instead and mistakes it for the moon, he loses not only the moon but the finger also. Why? He mistakes the pointing finger for the bright moon.3From Shurangama Sutra Vol. 2, Ch. 1 "Seeing does not return" - translation by City of Ten Thousand Buddhas.

As spoken by Bruce Lee in Enter The Dragon (1973)4Ed.: see also the analysis at Fake Buddha Quotes, where a version of this quote is also traced to a part of St. Augustine’s “On Christian Doctrine” that was written around 397 CE, possibly contemporaneous with Buddhist sources.:

“It is like a finger pointing a way to the moon
Don’t concentrate on the finger,
Or you will miss all the heavenly glory.”5See timestamp t = 1:18 in this clip from the movie on YouTube.

Because when we talk about method, we’re talking about means. Have you watched “Enter the Dragon”, the Bruce Lee movie? Bruce Lee says this. He’s quoting from a Zen teaching by the way, “When I point with my finger towards the moon, don’t look at the finger, look at the moon”. The finger is necessary. But many people look at the finger instead of the moon. Many fingers are necessary. You can point all ten of them if you want, but that might confuse you. Sometimes, just [pointing with just one finger] is good. Just like that. Other times, you know like the traffic police in Thimphu [you point with your whole arm]. It does add up. It creates the style. I’m serious.

Appears in DJKR teaching on "The Way of Vipassana", Bengaluru, India, January 4, 2020:

The path is not the goal. Like the great Zen master said, when when somebody points at the moon, you are not supposed to look at the finger but the moon. The path, the finger, is not the end. It is just the means.

From Hamlet, Act II, Scene 2, where Hamlet, the Prince of Denmark, is talking to Rosencrantz and Guildenstern, some courtiers who are also his friends:

[Hamlet]: Denmark’s a prison.
[Rozencrantz]: Then is the world one.
[Hamlet]: A goodly one, in which there are many confines, wards, and dungeons, Denmark being one o' th' worst.
[Rozencrantz]: We think not so, my lord.
[Hamlet]: Why, then, ’tis none to you, for there is nothing either good or bad, but thinking makes it so. To me it is a prison.

≫ To arrive where we started and know the place for the first time (T. S. Eliot)

From the poem "Little Gidding" which is part of the Four Quartets (1942):

From the poem Seeker of truth (posthumous):

From the final shloka of Nagarjuna’s Mulamadhyamakakarika, XXVII:30:

I salute Gautama, who, based on compassion,
Taught the true Dharma for the abandonment of all views.

As long as you have a view [you are inauthentic]. This is why Nagarjuna goes on and on in the madhyamaka about “no view”. This is also why the Mahayana people always praise the Buddha saying “I praise the Buddha who has taught us the path that has no view”. [No view], shunyata, emptiness, inherently nonexistent, etc. - basically, as long as you have a view, you’re doomed.

Appears in DJKR teaching on "Introduction to the Middle Way", Dordogne, France, 1996 (page 80 of transcript):

At the end of the sixth chapter, our opponent asks, if you do not have a view, why are you doing this? The Prasangika answer is that it is out of our great compassion, because we know you have so many problems, and we cannot resist telling you that you have these problems! Therefore, we have come here to destroy all your views. Whenever His Holiness the Dalai Lama teaches, even when he was about to receive the Nobel Peace Prize, he chants the following sloka, which essentially means, “To the lord Buddha, who has no view, I prostrate”:

To the lord Buddha,
Who taught us the view-less teaching,
In order to destroy all views,
I prostrate.

All these branches of the Doctrine
The Enlightened Sage expounded for the sake of wisdom.
Therefore they must cultivate this wisdom
Who wish to have an end of suffering.

Appears in DJKR teaching "The Way of Vipassana", Bengaluru, January 4, 2020:

[In Chapter 9 of the Bodhicharyavatara, Shantideva said] "All these disciplines, such as generosity, such as patience, such as ethics, morality, discipline, all that is taught by the Buddha just so that it can bring prajña, wisdom”. If there is no prajña, if there is no wisdom, all the so-called generosity, ethics, discipline, morality, they’ll just cause suffering. They’ll case self-righteousness, they’ll cause narrow-mindedness, they cause pride.